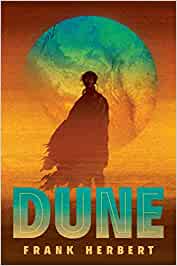 Here are three short interviews with the author who died in 1986.

For people who only watched the 1984 movie (crummy because it was 5 hours long but was cut down to 131 minutes for theaters) or only read the graphic novels, you might want to purchase this gem from Amazon (titled: Dune: Deluxe Edition Hardcover – Oct. 1 2019). I just took delivery of a copy (weighs in at 658 pages). I have watch everything about Dune including the mini-series but your should know that there is stuff in the book that has never been put on any screen (but Dune 2021 comes close)

The 700-page novel is divided into three books:

If I was a betting man, I'd wager that the sequel to Dune 2021 will be titled: MUAD'DIB

The Testaments: A Novel (2019) Margaret Atwood

Set 15-years after The Handmaid's Tale (reviewed 2-page clicks below), "The Testaments" is book of speculative fiction which explores life in an American Christian Theocracy named Gilead
comment: daily news about American states challenging female reproductive rights makes me wonder if this speculative fiction is already become fact. Obviously many of the American religious-right do not think the idea of Gilead would be a bad thing. Doesn't anyone ever heed the warnings of speculative-fiction any more?

This book contains the testimony of three people: Aunt Lydia in Ardua Hall, Witness 369A and Witness 369B. While I do not think the book was meant to terrify, similarities between my own childhood (I was raised by Christian Evangelicals) and Witness 369A have triggered several nightmares. I suspect that some readers educated in Catholic schoolrooms may associate some nun-related experiences with the shenanigans by the Aunts. Students of history will see similarities between Rodrigo Borgia and Commander Judd. Likewise, activities by some of the Commanders will be associated with the Cardinals of Rodrigo's day.

IMHO, people who have previously read "A Handmaid's Tale" or watched the recent TV series will get more out of this book than those who didn't. For that reason alone, I have included a few observations which some readers might consider SPOILERS so those people should not read past the five hash marks.

Offred (June Osborne) had two daughters:  Hannah/Agnes was raised in Gilead, and Emily/Nicole was raised in Canada as Daisy. Witness 369A represents the testimony of Hannah/Agnes while Witness 369B represents the testimony of Emily/Nicole. We learn that Offred is living in Canada which means she was not able to leave Gilead with her oldest daughter. Since this book is presented as a testimony, it is safe to assume that Gilead has collapsed and some sort of official investigation was made. Be sure to read the last chapter titled "The Thirteenth Symposium" dated 2197. Now go back a read the last chapter of "The Handmaid's Tale" titled "Historical Notes" dated 2195.

Celebrating the fiftieth anniversary of the film’s release, this is the definitive story of the making of 2001: A Space Odyssey, acclaimed today as one of the greatest films ever made, including the inside account of how director Stanley Kubrick and writer Arthur C. Clarke created this cinematic masterpiece.

Regarded as a masterpiece today, 2001: A Space Odyssey received mixed reviews on its 1968 release. Despite the success of Dr. Strangelove, director Stanley Kubrick wasn’t yet recognized as a great filmmaker, and 2001 was radically innovative, with little dialogue and no strong central character. Although some leading critics slammed the film as incomprehensible and self-indulgent, the public lined up to see it. 2001’s resounding commercial success launched the genre of big-budget science fiction spectaculars. Such directors as George Lucas, Steven Spielberg, Ridley Scott, and James Cameron have acknowledged its profound influence.

Author Michael Benson explains how 2001 was made, telling the story primarily through the two people most responsible for the film, Kubrick and science fiction legend Arthur C. Clarke. Benson interviewed Clarke many times, and has also spoken at length with Kubrick’s widow, Christiane; with visual effects supervisor Doug Trumbull; with Dan Richter, who played 2001’s leading man-ape; and many others.

Andy Weir is the author of The Martian which was made into a 2015 movie by Ridley Scott. Artemis is a sci-fi story about life on the first permanent moon base. It has already been optioned by Hollywood for a future flick.

A dystopian vision of a future in which [American] Christian fundamentalists have executed the President, machine-gunned the Congress (blaming the assassinations on Muslim fanatics), suspended the constitution, and created a new social order in which women are, at best, commodities.

comments: There is no science in this fiction so the tag "speculative fiction" is more appropriate. This story was written in 1984 but contains many similarities to western life in 2017. For example, many people in this story pretend to be pious bible-thumpers but are secretly sexual, if not perverse. Computerized banking enabled their society to become hijacked. Young men have very little to do so are employed by the military/paramilitary groups to protect the theocracy. Pollution (chemical, genetic and radioactive) prevents many people from reproducing but only women are blamed. The new nation's capital has been moved to Anchorage Alaska [ 24 years before anyone ever heard the name Sarah Palin ]. Many people in this story are obsessed with "the wall".

A Book Within a Book?

The Handmaid's Tale covers 313 pages divided into 46 chapters and stands on its own as a chillingly brilliant cautionary tale. What follows is another 15 pages in an apparent appendix titled "Historical Notes". I wonder how many people read up to this page then just closed the book. This last fictional chapter is even more chilling if not down-right scary. It begins as follows:

Being a partial transcript of the proceedings of the Twelfth Symposium on Gileadean Studies, held as part of the International Historical Association Convention, held at the University of Denay, Nunavit, on June 25, 2195.

Before the Internet was commonplace, William Gibson showed us the Matrix—a world within the world, the representation of every byte of data in cyberspace. Henry Dorsett Case was the sharpest data-thief in the Matrix, until an ex-employer crippled his nervous system. Now a new employer has recruited him for a last-chance run against an unthinkably powerful artificial intelligence. With a mirror-eyed girl street-samurai riding shotgun, he’s ready for the silicon-quick, bleakly prophetic adventure that upped the ante on an entire genre of fiction.

comment: if you enjoyed the movie Blade Runner or the video game Deus Ex then this book is for you

I first read this dystopian sci-fi story 45 years ago but re-read it again after stumbling upon a free PDF copy. What I treat to re-read it as an Adult while using Wikipedia to retrieve rare words like "freemartin" and "viviparous". I have always believed that dystopian stories provide humanity with warnings about what might go wrong with utopian plans.

After rewatching this movie on New Year's day (2007-01-01), I visited www.bookfinder.com to purchase a 1999 hardcover copy of the book. What a treat; so timeless and yet still relevant.

Some Observations (and spoilers):

completely off topic comment: that VMS + 111 = WNT is a similar accidental coincidence even though both product lines were engineered by Dave Cutler

The new celestial body that appears in the outer reaches of our solar system in 2130 believed at first to be an asteroid, and named Rama by earthlings, soon proves not to be a natural object. It is a vast cylinder - about thirty-one miles long and twelve and a half across, with a mass of at least ten trillion tons - that is moving steadily closer to the Sun. The five-thousand-ton spaceship Endeavour lands on Rama, and when Commander Bill Norton and his crew make their way into its hollow interior they find a whole self-contained world - a world that has been cruising through space for at least 200,00 years and perhaps for more than a million. They have, at most, three weeks to explore Rama: a dead world, as it seems at first, though not without its perils, and with intensifying perils when it proves to be, in its own astonishing way, very much alive. Yet in the end it is Homo sapiens who poses the greatest menace, and whose exploits bring a continuously absorbing narrative to its highest pitch of excitement.

I read this book 39 years ago but did not realize (until now) that I had forgotten 90% of it.

Large spaceships appear over Earth's largest cities. The Overlords have announced that they will not to show themselves until 50 years have past, but they do have a few demands: put a stop to racism; put a stop to war; put a stop to animal cruelty (like bull fighting).

I thought I had read this book but I was mistaken.

Five thousand years in the future, humanity has spread across thousands of worlds and has more than a dozen different governments existing in an uneasy truce. For all this expansion, though, human beings have found no signs of other live close to approaching that of human intelligence anywhere. This changes when scientists discover Danann, a sunless planet traveling the void just beyond the edge of the galaxy at such a high speed that is cannot be natural. It is a world whose continents and oceans have been sculpted and shaped, with but a single megaplex upon it - close to perfectly preserved - with tens of thousands of near-identical metallic-silver-blue towers set along curved canals. Yet Danann has been abandoned for so long that even the atmosphere has frozen solid. The preservation alone hints at a miraculous level of technology. Within a few years, Danann will approach an area of singularities that will make exploration and investigation impossible. Orbital shuttle pilot Jiendra Chang, artist Chendor Barna, and history professor Liam Fitzhugh are recruited by the comity government and its Deep Space Service [D.D.S.], along with scores of other experts - predominantly specialists in aspects of hard physical sciences- as part of an unprecedented and unique archeological expedition in an effort to unravel Danann's secrets. This is the story of their voyage beyond the galactic rim.