The Computed Limit of Human Population

CAVEAT: the following effort was created before the COVID-19 pandemic. Numerous scientists said that a large pandemic was inevitable while most politicians ignored the warnings.

It all started by "Thinking about Communicable Disease"

... tell us that the Influenza Pandemic of 1918 was triggered by soldiers living in close proximity during World War I. British medical archives tell us that an unknown disease (now known as The Flu) started in 1916 and then returned in 1917, 1918 and 1919. Apparently diseases often reach pandemic proportions after three iterations.

I started thinking that communicable disease would certainly exterminate all of humanity if we lived in similar proximity to World War I soldiers, and I wondered what that number would be. But all of humanity can't live like soldiers because we need (at the very minimum) to "set aside farm areas to provide us with food" and "industrial areas to provide us with clean water while processing our detritus". While it is true that tall buildings allow urban peoples to live more densely than field soldiers, human population will ultimately be limited by the area of land required to support life. And I wondered what that number would be.

This table provides a starting point for comparative purposes (note: I'm not sure if they are using total area or agriculturally usable area).

Unit Conversions (and other stuff)

How large is one billion?

World Losses in Productivity (is it one degree Fahrenheit or Celsius?)

I have always been looking for publications which would say that an overall 10% loss is due to an increase of one degree Fahrenheit or one degree Celsius but have had no luck to date.

Considering all these points:

I am going to speculate that Celsius is correct figure when considering world-wide losses in biological productivity.

Tree growth is slowed by heat

Oceans cannot be relied upon to pick up the slack

Have We Already Passed the Tripping Point? Maybe.

Some people tell me "humanity has nothing to worry about because CO2 is good for plants". Supposing that this statement is not a naive over simplification then we must ask: when can we expect plants to react to the excess CO2? Referring to the Keeling Curve for a moment, it looks like CO2 has been on a constant rise ever since Charles Keeling started taking official measurements in Hawaii starting in 1958. The rising line looks fairly straight and you would have thought we might see the results of an explosion of plant life to compensate for all the additional CO2. More update-to-date atmospheric measurements, charts, and datasets can be retrieved from NOAA's GMD (global monitoring division) site. Raw data in csv format (can be imported into MS-EXCEL) can be retrieved here: http://scrippso2.ucsd.edu/cosub2sub-data

Perhaps higher atmospheric temperatures (due to higher CO2 levels) are preventing plant life (at least C3 plant life) from exploding into the role of "environmental savior" because the atmospheric temperature chart seems to have grown continually since 1878 when the International Meteorological Society began daily world-wide measurements. One thing that is certain is this: additional deforestation by humans probably hasn't helped. Especially if it was done by slash-and-burn techniques.

Some people tell me "higher levels of CO2 will force plants to grow". This is a gross oversimplification for the following two reasons: 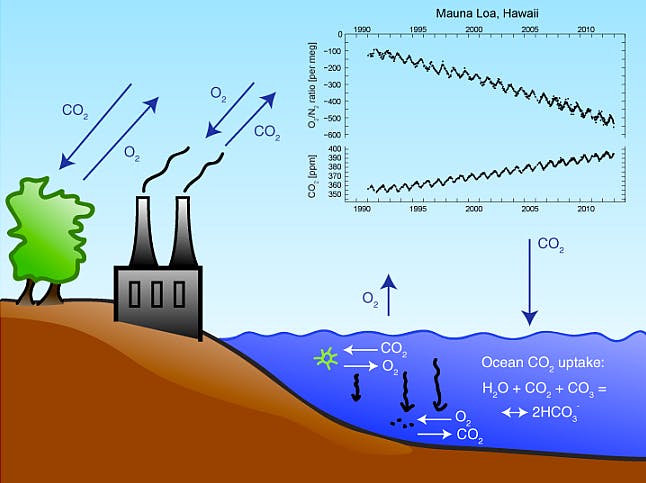 I recently stumbled onto this article at John Cook's Skeptical Science site which states "Atmospheric O2 (oxygen) is decreasing by the same amount that CO2 (carbon dioxide) is increasing".

Googling this phrase: atmospheric oxygen depletion
yields documents like these:

Yikes! I think I made a fairly strong case at the top of this page for the area of farmland being the main limiting factor to the human population but it now looks like humanity is using more oxygen than is being replenished by photosynthesis.

The article also states "Atmospheric Oxygen is so abundant at about 20.9% (209,500 parts per million or ppm) that we are in no danger of running out". But I think we need to realize that our planet has "turned a corner" which means humanity cannot continue previous behavior.

While it is true that 7 billion humans are busy inhaling O2 and exhaling CO2, no one has mentioned the elephant in the room: automobiles. Like large animals engaged in respiration, automobiles (which experts number at slightly over 1 billion) are responsible for a large amount (perhaps 20%) of O2 being converted in CO2. Really large machines like locomotives, tankers, cruise ships, and jet air craft, consume way more O2 than a car, but there are far fewer of them compared to automobiles. So at the very least, the automobile population needs to be included when computing the maximum population of human and large animals at the top of this page. We all know that humanity has no intention of giving up personal transportation so I think I have just convinced myself of the need for electric cars powered by renewable energy from hydrological, wind and solar technologies.

Parable of the Bacteria in a Bottle

Developed by Al Bartlett, professor of physics at University of Colorado 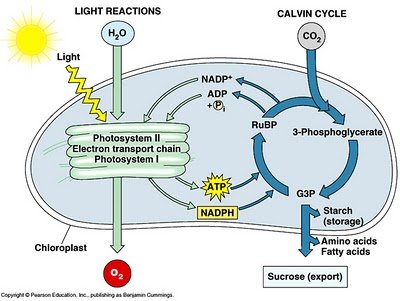 A refresher on photosynthesis

A refresher on cellular respiration

Assertion: One U.S. Gallon of Gasoline = energy needs of one human for 20.8 days