an 'Apollo Lander' simulation for Windows 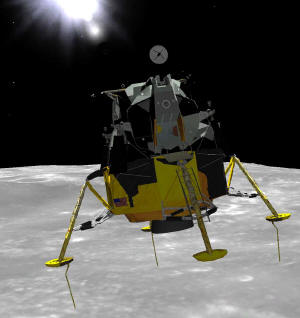 Screen shot: An actual exterior view of the LM descending to the moon in this simulation
IntroductionUsing the Simulation

Activity 1a (free): Locating Instruments and Switches on Your First Mission

"Free Version" Caveat: "Apollo-11 Short" is the only mission enabled -and- the DSKY keypad is disabled.

Activity 2 (licensed): Apollo-12 Lands in the Ocean of Storms (with EVA to Surveyor-3)

Alternate variation: Why walk to Hadley Rill when you can fly there?

Another Variation: "How Low Are We? (compared to the mountains)" and "Lets Do an Abort"

Caveat: In version 2.1.2 this section is a little flaky so you must follow theses instructions to the letter. Failure to do so will result in you hearing ascent audio but not seeing the associated video.

Windows-Vista Caveat: there are two keyboard definition files With Windows-Vista you will be probably be using file "KeyboardOnly.ini" but will find that the EQUALS key is not being recognized by EagleLander3d. Just edit this file like so:

The following resources are not required when using 'Eagle Lander 3d'.
This stuff is targeted at "Space Enthusiasts", "NASA Nerds" and "Guidance Geeks"