In 1597, English philosopher Francis Bacon said 'knowledge is power'. This may be the first time for humanity that 'power (both electrical + computer) produces knowledge'

The Wikipedia article is more informative than this personal effort. 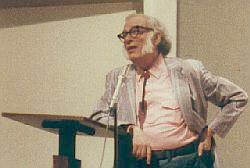 Folding@home is biological research based upon the science of Molecular Dynamics where molecular chemistry and mathematics are combined in computer-based models to predict how protein molecules might fold (or misfold) in three spatial dimensions over time.

When I first heard about this, I recalled the science-fiction magnum opus by Isaac Asimov colloquially known as The Foundation Trilogy which introduced a fictional branch of science called psychohistory where statistics, history and sociology are combined in computer-based models to predict humanity's future.

Years ago I became infected with an Asimov inspired optimism about humanity's future and have since felt the need to promote it. While Folding@home will not cure my "infection of optimism", I am convinced Dr. Isaac Asimov (who received a Ph.D. in Biochemistry from Columbia in 1948 then was employed as a Professor of Biochemistry at the Boston School of Medicine until 1958 when his publishing workload became too large) would have been fascinated by something like this.

I was considering a financial charitable donation to Folding@home when it occurred to me that my money would be better spent by:

Dr. Asimov: I am dedicating this website to you and your publishing. You have greatly influenced my life.

Misfolded proteins have been associated with numerous diseases and age-related illnesses. However, proteins are much more larger and so much more complicated than smaller molecules that it is not possible to begin a chemical experiment without first providing hints to researchers about where to look and what to look for. Since the behavior of atoms-in-molecules (Computational Chemistry)  as well as atoms-between-molecules (Molecular Dynamics) can be modeled, it makes more sense to begin with a computer analysis. Then permitted configurations can then be passed on to experimental researchers.

Cooking an egg causes the clear protein (albumen) to unfold into long strings which now can intertwine into a tangled network which will stiffen then scatter light (appear white). No chemical change has occurred but taste, volume and color have been altered.

Click here to read a short "protein article" by Isaac Asimov published in 1993 shortly after his death.

Using the most powerful single core processor (CPU) available today, simulating the folding possibilities of one large protein molecule for one millisecond of chemical time might require one million days (2737 years) of computational time. However, if the problem is sliced up then assigned to 100,000 personal computers over the internet, the computational time drops to ten days. Convincing friends, relatives, and employers to do the same would reduce the computational time requirement to one day

This "folding knowledge" will be used to develop new drugs for treating diseases such as: 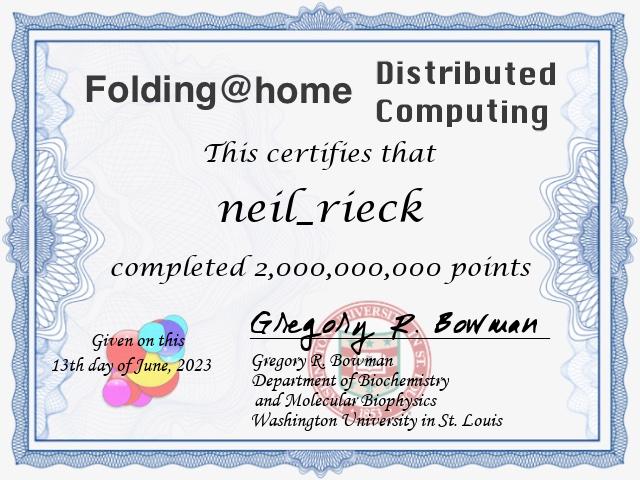 I found two junk PCs in my basement with 64-bit CPUs that were running 32-bit operating systems (Windows-XP and Windows-Vista). Unfortunately for me, neither were eligible for Microsoft's free upgrade to Windows-10; and I had no intention of buying a new 64-bit OS just for this. So I swapped out Windows with CentOS-7 and was able to get each one folding with very little difficulty. Here are some tips for people who are not Linux gurus:

Both of my CentOS-7 machines stopped folding 2021-12. Apparently this is due to several changes by the FAH research team.

DOS commands for creating, and starting, a Windows Service to execute a DOS script.

Once created, you can stop/start/modify a service graphically from this Windows location:

Stopped services may only be deleted from DOS like so:

BOINC (Berkeley Open Infrastructure for Network Computing) is a science framework in which you can support one, or more, projects of choice.

Personal Comment: I wonder why HP (Hewlett-Packard) has not followed IBM's lead. Up until now I always thought of IBM as the template of uber-capitalism but it seems that the title of "king of profit by the elimination of seemingly superfluous expenses" goes to HP. Don't they realize that IBM's effort in this area is done under IBM's advertising budgets? Just like IBM's 1990s foray into chess playing systems (e.g. Deep Blue) led to increased sales as well as share prices, one day IBM will be able to say "IBM contributed to a treatments for human diseases including cancer". IBM actions in this area reinforce the public's association with IBM and information processing.

The Encyclopedia of DNA Elements (ENCODE) Consortium is an international collaboration of research groups funded by the National Human Genome Research Institute (NHGRI). The goal of ENCODE is to build a comprehensive parts list of functional elements in the human genome, including elements that act at the protein and RNA levels, and regulatory elements that control cells and circumstances in which a gene is active.

Recommended Biology Books (I own them all)